Please join us as we host this AzAmazing sailing from Copenhagen to Southampton on Azamara Pursuit. Contact us today for reservations and information on this Virtuoso Voyage.

Virtuoso Voyages are enhanced cruise experiences available only to those who book their cruise travel through a Virtuoso-affiliated travel agency. The program offers complimentary benefits on the world’s finest cruise ships across hundreds of annual departures. 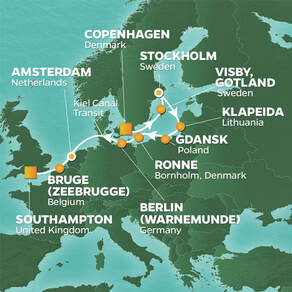 Begin your journey in Copenhagen. Known as the city of spires, its skyline is punctuated by dramatic towers and stately steeples. With plenty of parks and green space to explore, Copenhagen is also ideal for leisurely strolls in the sunshine. In Visby, charming cobbled streets wind their way to the remains of medieval churches and glimpses of the Viking era. Don’t forget to stop and smell the roses – literally, as the town is renowned for its lush, fragrant blooms.

Next is an overnight in lively, cosmopolitan Stockholm. With an appealing mix of modern Scandinavian architecture and fairy tale palaces, its green spaces and winding waterways are sure to enchant and inspire. A late night in Klaipeda follows. As Lithuania’s oldest city, its old town is a picturesque mixture of stately architecture, cobblestone streets, and a charming square.

Next on the itinerary is Gdansk, where a late stay gives you plenty of time for discovering medieval castles and sampling freshly-caught seafood. Discover Ronne, Denmark —a lush, picturesque garden town, then the seaside resort town of Warnemunde, Germany, where you can explore the neighboring 800-year-old Hanseatic city of Rostock or take a day trip to  Berlin.

​Cruise through the Kiel Canal, a 61-mile engineering marvel, linking the North and Baltic Seas before arriving in Amsterdam for an overnight stay. Tour the city from a glass-topped boat on the 17th-century Canal Ring, a place on the UNESCO World Heritage list.
In Bruges, wander the maze of its medieval core, another UNESCO World Heritage site, then savor a dish of moules-frites (mussels in broth served with fries) Belgium’s unofficial national dish. Your voyage concludes in Southampton—an historic maritime center and the departure point for the Mayflower and the Titanic. 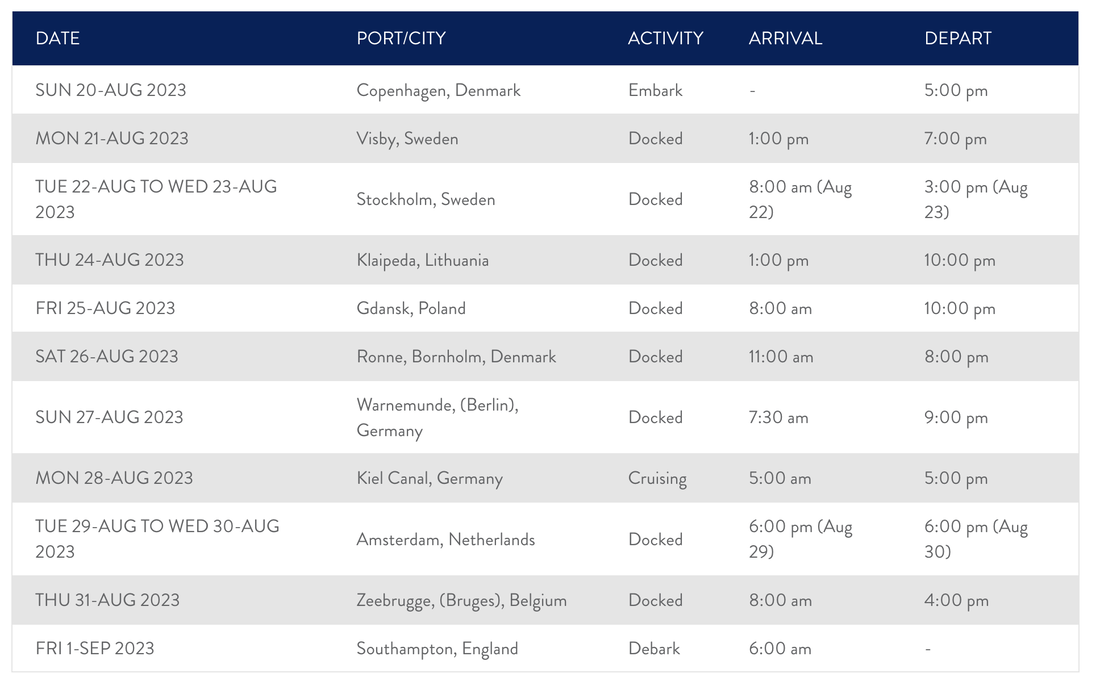